The modal response of hockey sticks affects their performance and usability in the hockey sport. In order to improve the performance of their sticks, one popular hockey stick manufacture used the CoCo signal analyzer to characterize this modal behavior. They used an impact hammer for excitation, an accelerometer to measure response, the CoCo for data acquisition, and ME’scope for the analysis. Hammer testing is a common way to measure the properties of mechanical structures. It involves striking the structure at various points to impart energy, and measuring its response at one or more response points. The resonant frequencies, mode shapes, and damping characteristics can be measured from this data. 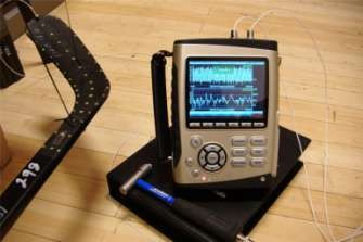 In this test, a fixed response point was chosen and theexcitation was moved. Channel 2captured the response at a fixed location and channel 1 measured the impact force at various locations on the stick. The number of measurement points was 12 to 120 points, depending on the resolution of the mode shapes that was needed.

This block size setting gave adequate frequency resolution for this structure. The force- exponential window is the best window to use for hammer tests.

Choosing the correct analysis frequency range is important for this type of test, and it may take a couple iterations to get this

setting right. If the frequency range is set to high, then the frequency resolution is spread too thin over the bandwidth for accurate measurement. If set too low, then important modes in the higher frequencies may be missed. In this test, the analysis frequency range was set as 1843.2Hz (sampling rate 4096Hz).

To capture the transient data from the hammer strike, a trigger was used on the CoCo. Trigger settings are changed under  Acquisition Mode in the Param (F2) menu.

For the impact hammer test, the following settings were used:

With all the parameters set, data was collected for each impact point. With the trigger on, the CoCo displays a trigger source window and waits for a trigger event. When an event is detected, a preview is shown,along with an option to accept or reject the input. Accepting it will add data blocks from each channel the running average of the power spectrum and frequency response calculations. The averaged data can then be saved by pressing the Save button on the CoCo.

After the test was run and the data saved to the CoCo, it was downloaded to the computer and then exported in UFF format,

which is readable by MEscope.In MEscope, a coordinate system was created to create a physical model of the hockey stick. The impact and response points were then set, and each point was associated with the corresponding data imported from the CoCo.

MEscope then performed a curve fit of the modal shapes, and calculated the resonant frequencies and damping characteristics. The end result was an animated model of the hockey stick structure. 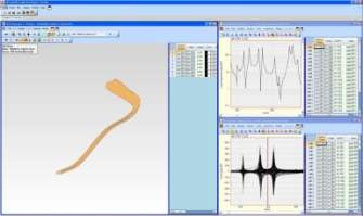