The CoCo-80 is the first hand held data acquisition device to incorporate the ASAM ODS data format. This format was initially developed in the automotive industry to improve the portability of data between hardware and software platforms. It is now used by a majority of the world’s automotive manufacturers and suppliers. This paper describes the ASAM ODS data format and how it is implemented on the CoCo-80.

Exchanging data between different hardware and software platforms has always been a challenge in the test and measurement industry. Data typically moves from one platform such as a data acquisition device to another such as a personal computer or a data server.   It also is used by various different software tools. For example Figure 1 shows a typical test and measurement process with a device under test, data acquisition and device and test controls. Test data is saved in a data management/archival system and then used in analysis and design tools. At each phase of the process data must be shared between platforms with no loss of data. 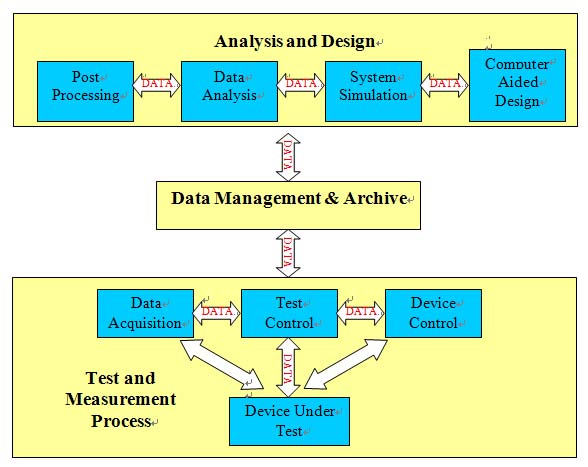 Difficulties arise when the data format developed by one system vendor is not understood by another, or when data is spread across several different files and the relationship between the files is lost. Typically the solution has been that software vendors provide translation tools that convert their proprietary format into some “universal data format” or into the proprietary format of another vendor. This requires cooperation between many different vendors and is difficult to manage. The process is further complicated when software versions are updated or older data formats are no longer supported.

The reason that sharing data between platforms is so difficult is that vendors design their data format to meet a number of different objectives. For example a data file may include meta information about the device under test, the test hardware, the test protocol, etc. The file may include one long array of one dimensional data such as acceleration versus time, or a multidimensional table of data such as spectra versus time. When a data file includes a large quantity of information such as sound recordings then the data must be saved in a compact format to conserve storage space. As vendors continually add functionality to their products, data formats change over time. Therefore it is not surprising that the data formats differ dramatically between any two vendors.

One effort to address these difficulties was the development of the Universal File formats in the late 1960s. The formats were originally developed as 80 character (card image), ASCII records that occur in a specific order according to each UF format. As computer files became routinely available, single UF formats were concatentated into computer file structures. Later, a hybrid UF file structure (UF Dataset 58 Binary) was developed for experimental data that allowed data to be stored in a more efficient binary format.

Before the introduction of ASAM ODS, the use of the Universal File Format as a defacto “standard” has been of great value to the experimental dynamics (vibration and acoustic) community, particularly in the area of modal analysis. Both users and vendors have benefited from this defacto standard. However the UF format is a static format in that it requires data to be recorded in a predefined format and does not allow the format to vary from the fixed standard. Many new test and measurement tools require a more flexible date format making the UF format obsolete.